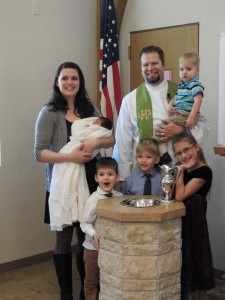 Pastor Kuschel enjoys spending time with his family, preaching and teaching, and he also enjoys playing baseball, soccer, and hockey. If you live in our community you might recognize Pastor Kuschel as a member of the Sacred Heart Saints (an amateur baseball team) or you might recognize him from the 212 WELS Soccer Camp that our local WELS congregations hold in Danube every year.